Allegations of sexual abuse made against several Rochester priests 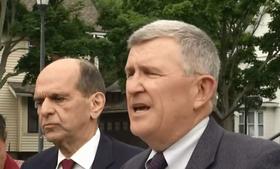 A Boston attorney was in Rochester Wednesday morning to announce that his firm is representing a group of people who say they were sexually abused by priests in the Rochester Catholic Diocese, during a period of time from 1950 to 1978.

The lawyer, Mitchell Garabedian, who has been prominent for representing victims of sexual abuse by priests and was depicted in the movie Spotlight, is making allegations against 8 priests. Garabedian says the alleged victims are now between the ages of 52 and 77.

The 8 priests the allegations are being made against are:

Allegations previously were made against 3 of those priests, Emo, Simon and Vogt.  The others were accused of abuse publicly for the first time.

oining Garabedian at the news conference in front of Sacred Heart Cathedral today was  Robert Hoatson, who heads up Road To Recovery,an organization that helps victims of sexual abuse.

He called for the Rochester Diocese to be more transparent in how it has been dealing with these priests.

"With resources, with finances, with all of the resources they need to make the truth evident and available and to help people heal, and it takes 17 courageous victims to bring us to the steps of this cathedral  in order for us to get the truth out."

Of the 17 alleged victims, Garabedian says 15 are men two are women.There has been no immediate comment from the Diocese, but a statement is expected later on Wednesday.

This is a developing story; check back later for more details.

James Faluszcak is a former priest of the Roman Catholic Diocese of Erie Pennsylvania, and a survivor of clergy sexual abuse:

Attorney Mitchell Garabedian of Boston, MA, says Canon law states that matters of sexual abuse are to be kept secret, but Bishop Salvator Matano has access to those so-called “secret files:"

Dunkirk priest placed on leave after complaint of abuse

A Dunkirk priest has been placed on administrative leave after a complaint of abuse.

The Roman Catholic Diocese of Buffalo on Monday announced it has placed a priest on administrative leave, one day after a published report revealed that priest had been accused in 1995 of sexually abusing a then teenaged girl. Meanwhile, a New Jersey-based advocacy group representing victims of alleged past abuse turned up pressure on Bishop Richard Malone, demanding he release all information on abuse cases or step down.

New York’s Catholic Cardinal Timothy Dolan met privately with Gov. Andrew Cuomo Tuesday over a proposed bill to give victims of childhood sexual abuse more access to the courts. The Cardinal remains opposed to a key provision of the measure.

The Buffalo Catholic Diocese has surpassed its goal of $100 million for its "Upon This Rock" capital and endowment campaign.

Buffalo Bishop Richard Malone ordained four new Catholic priests Saturday morning at St. Joseph Cathedral downtown. The once-a-year ceremony was a festive day for priests before they take on the challenges of their parishes.