The Asian carp captured this summer near the southern tip of Lake Michigan -- triggering a big scare -- apparently slipped past electric barriers.

Officials announced Friday that an autopsy of the 4-year-old fish showed that it originated in the Illinois/Middle Mississippi watershed, spending about a year in the Des Plaines River area.

It spent no more than a few months in the Little Calumet River before being captured on June 22, about nine miles from Lake Michigan.

But the Asian Carp Regional Coordinating Committee said it still doesn't know how the fish made it past the  U.S. Army Corps of Engineers’ underwater electric barriers.

The discovery of the eight-pound Asian carp beyond the barrier alarmed environmentalists and officials. Two varieties -- Silver carp and Bighead carp -- pose the biggest threat because of their voracious feeding habits. They eat large amount of zooplankton, and are seen as a threat to the Great Lakes ecosystem.

The fish found in the Little Calumet was a Silver carp. Scientists have speculated that some Asian carp -- especially smaller ones -- could be pulled by barges past the barriers.

"While we were disappointed to find an Asian carp close to Lake Michigan, we are pleased that we had a successful plan in place that found and removed it so quickly,” Kevin Irons, Illinois Department of Natural Resources Aquatic Nuisance Species program manager, said in a statement released Friday. “We will continue to work with our partners to ensure we have the resources we need to maintain the effectiveness of our monitoring plan.”

Southern Illinois University Fisheries Researcher Greg Whitledge examined the fish found in the Little Calumet River. He has said that while the discovery of this Silver Carp is a surprise, it’s not time to panic – yet. 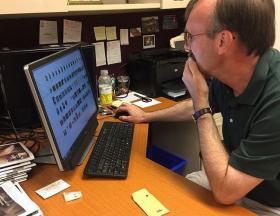 “It’s still only one individual. And so, while we don’t want to see any Asian carp in the Great Lakes, the fact that only two Asian carp have been caught on the Lake Michigan side of the electric barriers in the past 10 years is evidence that they haven’t established a viable, self-sustaining population up there yet,” he told Great Lakes Today.

In early August, the U.S. Army Corps of Engineers said new measures are needed to prevent Asian carp from getting into the Great Lakes.

Its report said the current defense at the Brandon Road lock in Illinois – an underwater electric barrier – should be beefed up. The Army Corps' recommended plan would add water jets and complex noises – like the underwater recordings of a boat motor. 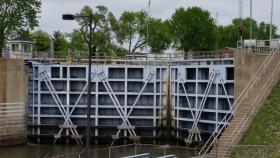 The total cost of implementing the “Tentatively Selected Plan” was estimated at $275 million, with 65 percent coming from the Army Corps and the rest from non-federal contributors.

​Asian Carp aren’t native to the United States. They were imported in the 1970s to filter water in fish farms in the South. But flooding took them into other waters, and they continue to spread.

In a long-awaited report, the U.S. Army Corps of Engineers says new measures are needed to prevent Asian carp from getting into the Great Lakes.

The report says the current defense at the Brandon Road lock in Illinois – an underwater electric barrier – should be beefed up. The Army Corps' recommended plan would add water jets and complex noises – like the underwater recordings of a boat motor.

Why did the Asian carp cross Lake Michigan's electric barrier? This scientist's on the case.

An Asian Carp was caught recently in a place where it shouldn’t be – beyond an electric barrier meant to keep the species out of Lake Michigan and the rest of the Great Lakes. Researchers at Southern Illinois University are trying to figure out just how it got there.

Did Great Lakes just get another invasive species?

A new non-native species has been found in western Lake Erie, the EPA said Monday.

It's named Brachionus leydigii. And it's a type of zooplankton, which means it could be food for lots of fish.