The big, strong Chinook salmon is a favorite of anglers on the Great Lakes. But New York and Michigan are reducing the number of Chinook they stock in the lakes and some are worried it could hurt the region's sport fishing economy. 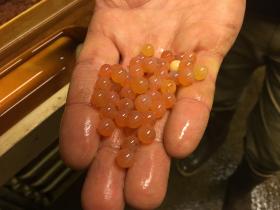 Every year, the Salmon River Fish Hatchery in Altmar, New York raises millions of fish to be stocked in Lake Ontario and Lake Erie. The hatchery raises several species of fish, but their pride and joy is the Chinook salmon.

Each fall, employees harvest millions of eggs, fertilize them, incubate them, and raise the fish until they're ready to be released into the wild.

This time of year, Les Resseguie and his team are overseeing millions of Chinook eggs -- each about the size of a pea -- incubating in big trays in the hatchery’s basement. At this point in their development, Resseguie says, their eyes and major blood vessels are visible.

"And you’ll actually see them wiggling around a little bit in there.”

Chinook can grow to be up to 40 pounds in just a couple years, which is partly why they were brought to Lake Ontario in the first place. Chinook were introduced to the Great Lakes in the 1960s to eat the invasive alewife -- a one- to two-inch bait fish that infiltrated and infested the lakes.

Fran Verdoliva, program director at the hatchery, says they were a perfect solution to the problem because, the eggs were available, they grow quickly, and when they spawn, they die.

"So they're out of the system."

But the Chinook had a secondary advantage. They’re known by anglers around the world for their fight. .

"There’s nothing like it. It's the crack cocaine of freshwater fishing," says Glen Buehner, a charter boat captain in Michigan and head of the Great Lakes Salmon Initiative.

Once Chinook stocking began in the Great Lakes, an entire economy sprouted up -- charter boats and guided trips, but also motels, restaurants and gas stations.

But now, after a few cold winters, the alewife population is in trouble. So the fisheries in New York and Michigan are reducing their stocking plans by over 600,000 Chinook to make sure neither population collapses.

For example, in Lake Huron, native species like lake trout and walleye are rebounding, but the alewife population collapsed, and salmon are no longer stocked. Beuhner says fishing these native species isn’t as exciting, and doesn’t draw as many tourists.

Sara Adlerstein, a University of Michigan researcher who studies food webs in Lake Huron, says the Chinook stocking was not sustainable.

She says the ecosystem is more stable without invasive and other non-native species. And she wants people to stop disrupting the food web where possible.

"As people, we need to forget the need to impose our will on nature," she says.

Meanwhile, officials in New York and Michigan say the environment and the fishing can improve simultaneously with the reduction to stocking, and they're trying to put the minds of anglers at ease.

Mini-tsunamis a hazard in the Great Lakes

The Great Lakes have their own miniature version of tsunamis – more than 100 times per year.  That’s according to new research led by the University of Wisconsin Madison.  The name of these waves – and the danger that comes with them – are relatively unknown to those in the region.

Great Lakes are warmer than normal. Snow on the way?

New heat maps from NOAA show the startling change in water temperatures across the Great Lakes this year.

Back in 2014, the heat map shows a bluish scene, illustrating cool temperatures. But this year, the map in late November temps is all yellows and oranges.

An upcoming conference in Cleveland will tackle marine debris, the pieces of plastic that wash up on the river, ocean, or Great Lake shores.  It's a issue that has affected the health and appearances of beaches around the world.  Marine debris can be anything in the lake that’s not supposed to be there – plastic bottles, grocery bags, or balloons.  It has a deadly effect on wildlife, especially birds.