After seeing Donald Trump's appointees for agencies such as the EPA, Rep. Brian Higgins is concerned that the new administration will roll back environmental protections. 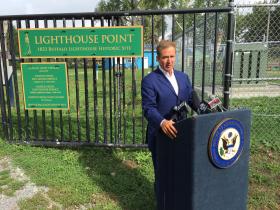 The Western New York Democrat is a longtime leader in revitalizing Buffalo's waterfront. In an interview Monday with WBFO, he noted that there have been have been many successes, including the revival of the once-dead Buffalo River.

"People have become complacent. ... " he added. "Now they're going to get blind-sided."

In the interview, Higgins also discussed the need to  balance development and open space on Buffalo's Outer Harbor, which lies along Lake Erie.

The redevelopment of the industrial Freezer Queen site for a 23-story apartment tower has triggered a public outcry -- and a lawsuit -- from some environmentalists.

Higgins said Buffalo's early attempts at redeveloping the waterfront did not provide much public access. The Freezer Queen project includes restaurants and other public access, he said.

Higgins said there's room for more development along Lake Erie, but cautioned, "We don't need another city on the Outer Harbor."

Higgins praised Chicago for retaining wide swaths of open space along Lake Michigan and preserving public access to the water.  He said the Windy City is a better development model than Baltimore, which has attracted attention for bringing new life to its waterfront.

Congress' approval of a spending bill will renew funding for a program that aids Great Lakes waters and surrounding lands.

Every year, hundreds of volunteers work to clear plastic bags and other garbage from areas along the Great Lakes and its tributaries.

The deep freeze has arrived in Great Lakes states and that means one thing: It's time for the Lake Erie/Niagara River Ice Boom.