Every weekend James Rice goes for a walk, but it’s not just any walk. He’s on a mission to educate anglers about the safest way to consume fish caught in Western New York.

Rice is a contractor for Buffalo Niagara Riverkeeper. On a recent weekend he was at Broderick Park on Buffalo's west side. It’s a hot spot for anglers from many cultures.

"You can go down any morning and see any background -- economically, socially, culturally -- fishing all at the same time," said Rice. "Whether or not they can communicate, there's still a fishing language that they share." 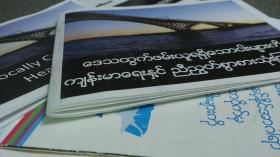 Like many areas along the Great Lakes corridor, the waters in Buffalo have been contaminated from years of industry. And dangerous chemicals can move up the food chain to the plates of the area’s most vulnerable residents.

Rice is reaching out to refugees and others on a broad scale. He’s passing out booklets with warnings about eating contaminated fish. The booklets come in many different languages: English, Chinese, Spanish, Burmese, and a heavily illustrated version for low literacy English.

The lack of money and transportation drives many refugees to Lake Erie and the Niagara River for food.

“So part of the environmental justice aspect of our work is a lot of folks do not have the money to buy their meat at the supermarket," said Robbyn Drake of Buffalo Niagara Riverkeeper. "So, we have a lot of people who are fishing because it’s a really easy cheap way to get food, when they can’t necessarily afford to get food at the supermarket."

"We have a lot of refugee people who come to Buffalo and they come from fishing cultures so they eat fish to survive," she said. "They're accustomed to doing that. They're going to see the waterways as a wonderful resource and they are a wonderful resource, but we have to take some precautions to keep our families safe from contamination." 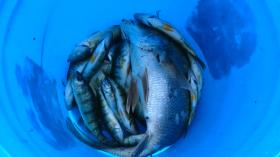 The information Rice hands out explains that some of the fish are more risky to eat than others.

For example, large fish are likely to be the most contaminated. It also advises that children and pregnant women should steer clear of the fish.

Rice also said that most of the chemicals are in the fat and tissues. If the fish is consumed, it should be skinned, gutted, cleaned and then grilled or broiled.

The Riverkeeper organization plans to continue its outreach. It hopes to offer booklets in more languages and install warning signs near popular fishing areas.

Grow tomatoes on dredge spoils? Could happen on Great Lakes

Each year, ports on the Great Lakes dredge tons of material to keep shipping lanes open. But disposing of the spoils is a big problem. The Port of Toledo has a creative approach: farming.

The Port of Toledo dredges more sediment than any port on the Great Lakes – up to a million cubic yards every year.  The idea of reusing sediment as soil for agriculture is new for the Great Lakes region and ideal for Lake Erie’s western basin.

Each summer, bacteria can force beaches on the Great Lakes to close. Now researchers are battling the bacteria with a genetic-based process.

Mayors of 123 American and Canadian cities are challenging a Wisconsin city’s plan to divert water from Lake Michigan. This is in direct opposition to the Great Lakes governors who approved the precedent-setting request in June.