Mayors from the Great Lakes region said Thursday that they will continue to fight against climate change -- despite President Trump's withdrawal from an international agreement.

"While the president of the United States has bowed out of the Paris Agreement, we are stepping up as cities to lead the charge against climate change," Niagara Falls (N.Y.) Mayor Paul Dyster said in a statement. He is the new chair of the Great Lakes and St. Lawrence Cities Initiative. 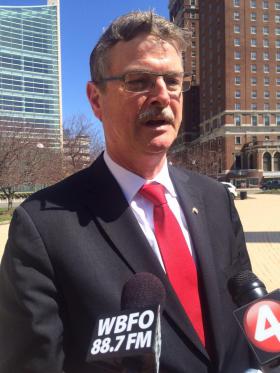 At their annual meeting, the mayors also vowed to push for continued U.S. funding of the Great Lakes Restoration Initiative. Trump's 2018 budget proposal eliminates $300 million for the initiative, which funds wetlands restoration, pollution cleanup and many other types of projects.

The president's budget shifts more money to defense, and says continued restoration work should be the responsibility of state and local governments in the Great Lakes region. Congress can modify the budget proposal, and officials from the region say they will push to restore funding.

Montreal Mayor Denis Coderre, the outgoing chair of the group, said, "Forty-eight million people depend on the Great Lakes and St. Lawrence for their drinking water. We are concerned for the future because such a decision would affect us all, from the port of Montreal to the waterfront restaurant in Windsor to the sport fisherman on Lake Superior."

The group is a coalition of 130 cities from the U.S. and Canada, representing more than 17 million residents.

Part 3 in a series about President Trump's budget

A lot of attention has focused on President Trump's proposal to eliminate funding for the Great Lakes Restoration Initiative, which doles out $300 million a year for various projects. But his "skinny budget" has other cuts -- including the National Sea Grant program -- that would affect the region.

Part 4 in a series on President Trump's budget

Thousands of dams have been built across the Great Lakes region -- but many are old and in danger of collapsing. In Michigan, conservation groups and state agencies are pooling resources to remove or repair dams before it’s too late.

Can Asian carp be kept out of Lake Michigan?

Part 2 in a series about President Trump's budget

President Donald Trump’s 2018 budget plan eliminates a $300 million program to restore the Great Lakes. The plan is sparking concern among environmentalists, because a lot of that money is used to protect the lakes from a voracious fish known as the Asian carp.

Listen
Listening...
/
Sounds from the Chicago Sanitary and Ship Canal

Part 1 of a series on President Trump's budget

Long-standing plans to clean up the headwaters of Lake Superior have been thrown into doubt by Trump administration budget priorities. Now, Minnesotans are wondering how to fill a multimillion-dollar hole.

Listen
Listening...
/
Sounds from the headwaters of Lake Superior