New York Congressmen who represent the southern shore of Lake Ontario say a U.S.-Canada regulatory body should pay for damages caused by weeks of flooding. 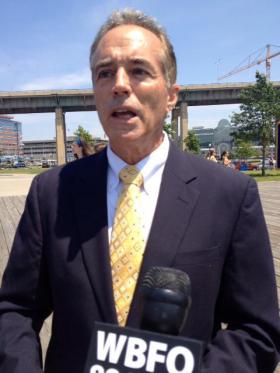 They met Tuesday with some local leaders from the region. And they proposed amending a spending bill to force the IJC to compensate shoreline property owners for millions of dollars in damage.

The IJC advises the U.S. and Canadian governments on regulating the Great Lakes. It also controls outflows from the Moses-Saunders hydroelectric dam, which helps to control the level of Lake Ontario.

But the IJC, the U.S. Army Corps of Engineers and others maintain that the flooding was triggered by unusually heavy spring rains -- not the lake management plan that took effect in January.

Collins and Katko echoed criticisms from N.Y. Gov. Andrew Cuomo, who has said the IJC "blew it."

"Residents, businesses and municipalities along the Lake Ontario shore deserve better than this bureaucratic mess, and the team that was in the meeting [Tuesday] is fighting for any relief that can be provided," Collins said in a statement.

Local leaders at the meeting said the IJC's plan -- known as Plan 2014 -- should be reversed. And they asked for assistance on damages.

"We’ve seen record devastation of Wayne County’s shoreline this year alone because of the failed implementation of Plan 2014," Wayne County Board of Supervisors Chairman Steve LeRoy said. "We will only see real relief with a full repeal of Plan 2014 by the IJC."

Niagara County official David Godfrey added, "The immediate financial impact on Niagara County alone has surpassed $21.7 million dollars, and the loss of sales tax revenues will be felt for months to come."

The war of words between N.Y. Gov. Andrew Cuomo and the International Joint Commission is continuing,  as residents along Lake Ontario deal with weeks of flooding.

In a letter to Cuomo, the IJC says flooding was triggered by heavy spring rains. And it rejects his suggestion that preventive counter-measures -- like releasing more water through a downstream dam -- should have been made.

Two area state lawmakers say they have reached agreement on bipartisan legislation to provide $90 million in financial relief for people living along Lake Ontario and the St. Lawrence River seaway.

Governor Cuomo stopped in shoreline communities in Greece and Sodus Point to unveil some new technology designed to save homes and businesses from further damage from high water levels on Lake Ontario.

Damage he says is due in part to a late response from the board that regulates water levels on Lake Ontario and the St. Lawrence River, the International Joint Commission.

Cuomo says the state is testing two "Aqua Dams," water filled synthetic device that, when it works, acts like a portable dam.

International board decides to increase outflow of water from Lake Ontario

There will be more water flowing out of Lake Ontario in an effort to help ease the recent flooding conditions along the south shore.

The International Lake Ontario-St. Lawrence River Board agreed this week to increase the water flowing out of the lake at a greater rate. Secretary for the board, Arun Heer says this will be the highest outflow ever released from the lake on a sustained basis.

Because of that, Heer says officials will closely monitor the situation for a few days to see if there are any major adverse impacts.

The US Army Corps of Engineers predicts that water across the Great Lakes will remain high for the duration of summer, and even into the fall.

The Corps says these high levels are due to above average precipitation on the lakes. Forecasted levels on Superior, Michigan-Huron, and Erie will be the highest since the 1990s.

Lake Ontario levels will also remain high, after setting a record for highest average lake levels for the month of May.