Is your fleece sweater hurting the Great Lakes?

Plastic debris is pervasive in the waters that feed the Great Lakes, according to a new study published by the United States Geological Survey. 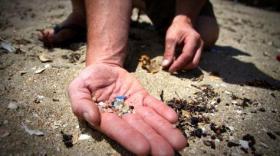 The study found widespread microplastics in 29 tributaries, with the highest concentrations in the Huron River at Ann Arbor, Mich., and the Buffalo River at Buffalo, N.Y.

Microplastics are fibers and beads that come from decomposing bottles and bags, clothing, and even some cosmetic products.

"If you kind of pinch your fleece, you'll come away with some little plastic fibers, kind of curly little fibers," said Austin Baldwin, a USGS hydrologist who co-authored the study.

Microplastics can be harmful to fish and other animals, including humans, by absorbing toxins from the water and being ingested.

Austin says the study allowed researchers to establish the types of microplastics present in the Great Lakes watershed. "A lot of the talk around microplastics has been around microbeads -- the little beads that are in personal care products -- but we actually found fibers to be much more abundant," he said.

President Obama signed a ban on products containing microbeads -- exfoliating particles contained in some toothpastes and facial scrubs -- in December of 2015. Baldwin says that will help address the problem.

But Baldwin notes there are other sources of tiny plastic fibers. Almost three-quarters of the microplastics in the sampled waters came from broken-down trash like diapers, plastic bags and cigarette butts.

The USGS partnered with the State University of New York at Fredonia to take more than 100 samples from tributaries in New York, Ohio, Indiana, Michigan, Wisconsin, and Minnesota. The study,  published this week in the journal Environmental Science & Technology, was funded by the Great Lakes Restoration Initiative.