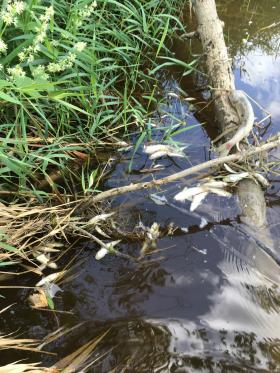 Tens of thousands of fish were killed off in streams in the western Lake Erie basin earlier this year. Now the state of Ohio is holding three men responsible for the fish kills.

The Ohio Department of Natural Resources says the men applied manure to farm fields and it ran into streams during August storms.  That can cause problems because ammonia from the manure depletes oxygen levels.

In northwest Ohio, more than 66,000 fish and other animals were killed in streams in three counties.

Ohio fined the three men a total of $32,782.87. Individual fines were related to the number and type of fish.

Sandy Bihn, executive director of the Lake Erie Foundation, an environmental group, says the fish highlights a conflict between the state’s reliance on agriculture and its concern about Lake Erie’s water quality.

“We keep adding more cows, hogs, and poultry to the basin is a major issue,” she says. “While we’re trying to reduce the amount of nutrients going into Lake Erie on one hand, we’re adding more manure from these animals on the other hand.”

Great Lakes Today could not reach the men for comment.

Niagara Falls, N.Y., has a messy problem -- it continues to dump sewage and discolored water downriver from the popular tourist attraction. The most recent incident happened Wednesday afternoon.

There are so many plans and programs in place to clean up the Great Lakes, it’s hard to keep track. In mid-October, environmentalists from across the region will meet to discuss their biggest challenges.

Restoring wetlands, fish success stories, and the relationship between wildlife and microplastics will all be discussed at the conference hosted by the National Wildlife Federation’s Healing our Waters Coalition.

Capt. Rod MacDonald has been piloting Niagara Falls tour boats for 29 years. He's seen a lot on the Maid of the Mist -- from anniversary celebrations to fatal jumps over Horseshoe Falls.

But some things stay the same: He wants his passengers to experience the falls up close. And he wants to keep them safe amid the swirling, churning waters.