The Great Lakes Commission created a web tool designed to prevent sales of aquatic invasive species over the Internet. Now, the commission is working to get it into the hands of state and federal regulators.

The software crawls the web looking for sites selling plants or animals invasive to the Great Lakes and then records the data. In the first 30 days of data gathering the web tool found 58 different invasive species sold online. 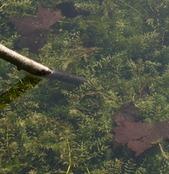 Project’s director Erika Jensen says most of the invaders purchased are aquatic plants. They make their way from homes into the environment.

“Some people, not knowing any better or having any better options, may have an aquarium or something like that, they no longer want,” she says. “So, they will perhaps dump it in a local waterway. People who have backyard water gardens those gardens could flood and potentially move plants and animals in their water garden to other local waterways.”

Andrea Locke of Western New York Prism, a group that specializes in invasive species, says that once invaders enter the environment the result can be severe.

“Invasive species pose a significant threat to our environment, our economy and human health” Locke says. “Each species is different in the threat that they pose. Some are primarily environmental issues as far as decreasing biodiversity, decreasing or impacting the structural diversity of our ecosystems.”

She says being aware of what you buy is key to preventing accidental purchases of invasive species online.

The project was funded with $340,000 from the Environmental Protection Agency.

Meet the creators of Making Waves: Battle for the Great Lakes

Invasive species -- ranging from sea lamprey to Asian carp -- are a constant concern in the Great Lakes region, and the fear of these aquatic creatures often dominates headlines.

Randy Vassh maneuvers an excavator in tandem with his co-worker at a lakefront home in the village of Caledonia, Wisc.

This week marks the 100th anniversary of the "Black Friday Storm," a swirl of rain, wind and waves that left about 50 people dead on Lake Erie.