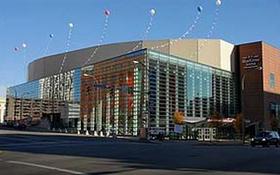 Rochester is getting new help to run the Blue Cross Arena. And that help is coming from Buffalo.

City officials had only recently announced that they were ending the longtime management contract for the arena with Philadelphia-based SMG.  At the time, Rochester officials said  that company had performed below expectations.

On Friday, Mayor Lovely Warren announced an agreement with Pegula Sports and Entertainment, the company owned by Terry and Kim Pegula who also own the Buffalo Bills, the Buffalo Sabres and the Rochester Amerks.

Pegula Sports and Entertainment Vice President of Business Operations,  Rob Minter, said  this is a good example of how important Rochester is to their company.

“Ever since Terry and Kim Pegula bought the Amerks years ago, to the extension of Bills training camp at St. John Fisher down the road, and really, now to operating Blue Cross Arena, this is a chance for us to show our commitment to the market and to the region on how much we care about Rochester and how happy we are to be here.”

The Pegula’s company will operate the Blue Cross Arena on an interim basis through the end of the year, with an eye toward coming up with a longer term agreement after that time.

Warren expects this arrangement to benefit taxpayers, with a better financial arrangement for the city and also bring additional entertainment events to that facility.

“PSE will take on all aspects of the arena operation including concessions, utilities, ticketing, booking events, security and tenant agreements. Additionally, PSE will pay rent to the city, where previously the city had been paying a management fee to the prior operator.”

The Blue Cross Arena is more than 60 years old. The Pegulas reportedly had expressed some concern about the aging facility a couple of years ago. Minter says they do want to work with the city to make the arena a first class facility, but no specific improvements were discussed during a Friday news conference.

Minter says at this point, he can only say, that, “everything’s a possibility.”  He said that, (the arena) “has a lot of history and character and working with the city and the great partnership that we have, everything’s up for review. We want customers to come in from the second they step foot on the property, to when they leave, to have it all be positive and fantastic for them, and so I think everything will go into consideration and we’re going to do everything  we can to provide a first class experience.”

The deal to have Pegula Sports and Entertainment manage the Blue Cross Arena must still be approved by Rochester City Council.