The latest numbers from the Centers for Disease Control and Prevention show suicide rates continuing to climb nationwide. In New York, the CDC found that the rate has risen almost 30 percent since 1999.

People who have gone to the emergency room once for an attempted suicide are at high risk for attempting it again after their release.

Now, a study has shown a straightforward way of reducing that risk: calling those patients.

“What was to me most surprising, and most heart-warming, was that patients said over and over, ‘this intervention saved my life,’” study author Barbara Stanley, of Columbia University, said in an interview with the Journal of the American Medical Association. 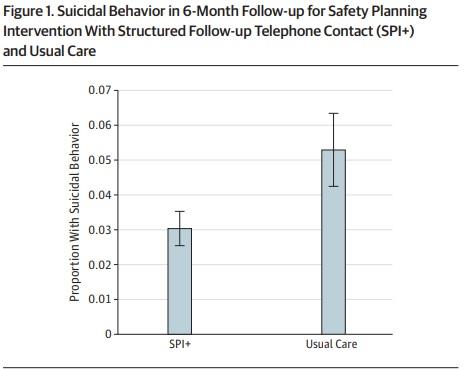 In the study, emergency room staff created a safety plan with patients who came to them after attempting suicide. After the patients’ discharge, hospital staff called them to check in and see how the plan was working.

Pauline Stahlbrodt manages the mental health clinic at Rochester Regional Health. She says her clinic already does much of what the study found successful.

“Our standard practice is to do that follow-up phone call,” Stahlbrodt said. “It seems so simple, but the reality is, it just makes you feel not alone.”

Stahlbrodt said fitting the safety planning and the calls into a time-strapped emergency room environment can seem daunting, but she stressed that it takes much less time than hospitalizing someone again.

The study found that this type of intervention reduced the odds of suicidal behavior by about half. Stanley said that’s because a person’s actual period of intense suicidal thoughts is usually short-lived: anywhere from a few minutes to a few hours. Devising a safety plan with distractions like video games or calling friends can get a person through that dangerous window unscathed, she said, and the call from the hospital to make sure the plan is working can make a huge difference.

Anyone struggling with suicidal thoughts or knows someone who is can call the national suicide prevention hotline. That number is 1-800-273-8255.