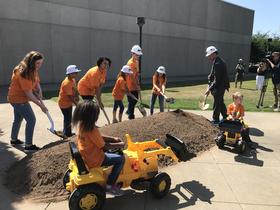 But that’s exactly how the Strong National Museum of Play broke ground Thursday on a 100,000 square foot expansion. That expansion will bring a new, larger atrium and entrance to the museum and include new exhibits like women in gaming, a ropes course, updated outdoor play area and parking garage.

“What’s exciting is that it’s not just the expansion of the museum. The project also helps to enable other development—mixed use development, retail, hospitality, residential. Right here, downtown,” said Howard Zemsky, Commissioner of the New York State Department of Economic Development.

Zemsky says the state has pledged $20 million to the Museum’s campaign, which has a goal of $60 million.

“Tourism is critical to driving the Finger Lakes economy, and The Strong Museum is a key attraction for the entire region," Governor Andrew Cuomo said in a statement the same day. "With these upgrades, this project will help to build economic momentum, attracting visitors from across the globe and fostering regional prosperity for generations to come."

Other development, like retail, will be funded by private partners. Construction on the museum is expected to be complete by the summer of 2020.

“This is a once-in-a-lifetime opportunity to building something that will be transformational for our members, our guests and our region,” said Steve Dubnik, president and CEO of the museum.

Staffers say planning for the project began in 2013, after the City of Rochester filled in part of the Inner Loop. The museum’s expansion is one of the first construction projects on Union Street, which replaces what officials had not so affectionately referred to as a "concrete moat" in the past, when they talked about plans to fill in part of the Loop.

Ealier this summer, officials gathered just blocks down the same street for another groundbreaking on Union. This one for a 50-unit affordable housing project. But officials say it marks the start of growth for the area.

Monroe County Executive Cheryl Dinolfo said the Museum is one of the top attractions in the county, bringing in people from throughout the region but staff say the expansion could spread their message as far as Toronto, Cleveland and Pittsburgh, which Dinolfo is hoping could translate into new residents.

Officials at Strong Museum say that overall they expect the expansion to double the number of visitors they see annually to about a million.