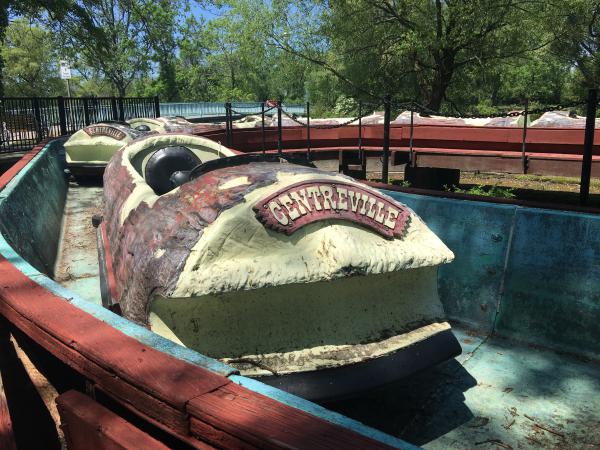 Flooding along Lake Ontario is still causing problems in Toronto, the biggest city in Canada, particularly for the picturesque harbor islands.

Julian Ganton owns Toronto Islands SUP, which stands for stand up paddleboard. He looks like a typical water sports guy in flip flops, board shorts, and sunglasses.

Normally, this time of year, Ganton would be giving tours or lessons, but instead, he is filling his time by paddling with his friends. “We’re gonna go check out some of the flooded areas of the island, and just take a tour through some of the lagoons,” he says.

The Toronto Islands are a huge pull for tourists. They are just a short ferry from downtown Toronto, with beachy cottages, boardwalks and bicycles – there are virtually no cars on the island.

But right now, there’s almost no one there. Restaurants and other businesses are suffering.

Undeterred, Ganton sees the opportunity for a new marketing strategy.

"It's been slower, of course," he says, "but we do feature in showing people the natural phenomenon and what it means to the natural landscapes: showing them flooded areas, touring the lagoons." 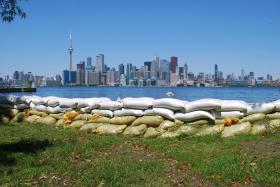 The islands were hit hard by the heavy spring rains that raised the level of Lake Ontario by two and a half feet. This spring they lost a lot of their beaches, water is pooling in people's yards, and their sewer systems are overwhelmed.

Currently, the islands are technically closed. There’s even a white piece of paper taped to the window of the ticket counter in the ferry terminal which says: Toronto Islands Closed until July 31. But, if you say you’re headed over for a day trip, you can get a ticket anyway.

That’s how Aviva Wade says she got over. She says she told the guy selling tickets she was visiting the islands for lunch with a friend. “And to check out what’s been going on after this unbelievable springtime we’ve had.”

As a visitor, she says she’s not particularly bothered by the lack of people on what would usually be a busy summer day.

“It’s kind of nice,” Wade says. “You’re going to have the place to yourself.”

Besides restaurants and beaches, the islands have another draw, their main attraction – the Centre Island Amusement Park.

This year the park turns 50. Usually, it would be full of people in the swan boats, eating funnel cakes or taking pony rides. Some would be putting their heads in those plywood cutouts painted like pirates and mermaids and making faces.

But now it's empty. It is here that the islands' closure feels the most dramatic, maybe because abandoned amusement parks are already kind of eerie.

The islands are scheduled to re-open in late July, assuming they don’t have any unforeseen problems or lingering health concerns. Workers are worried about standing water breeding mosquitos, or E. coli in the water from sewage problems.

But so far so good. The water continues to go down, and more of the beach is visible every day.

Right now crews are cleaning up the park, getting ready for summer visitors – hoping they come back.

New York Congressmen who represent the southern shore of Lake Ontario say a U.S.-Canada regulatory body should pay for damages caused by weeks of flooding.

The war of words between N.Y. Gov. Andrew Cuomo and the International Joint Commission is continuing,  as residents along Lake Ontario deal with weeks of flooding.

In a letter to Cuomo, the IJC says flooding was triggered by heavy spring rains. And it rejects his suggestion that preventive counter-measures -- like releasing more water through a downstream dam -- should have been made.