President Donald Trump took aim Tuesday at a rule that outlines the reach of the Clean Water Act, saying the rule was a "massive power grab" by federal regulators. But six attorneys general vowed to fight the rollback -- with lawsuits if necessary. 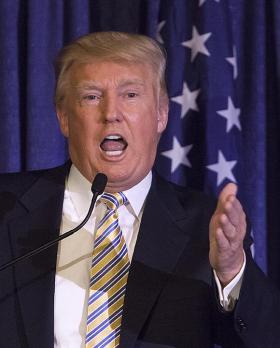 As NPR reported, Trump directed the EPA and Army Corps of Engineers to review an Obama administration rule defining which small bodies of water are subject to federal authority. Trump said he was "paving the way for the elimination" of the rule, which has been criticized by farmers as an example of over-regulation.

Almost immediately, the coalition of attorneys general vowed to fight the elimination of the Waters of the United States Rule.

The group, led by New York Attorney General Eric Schneiderman, said in a statement: "The Clean Water Rule is a measured, reasonable, and lawful application of sound and uncontroverted science to protect our nation’s upstream source waters. ...

"We won’t hesitate to protect our people and our environment—including by aggressively opposing in court President Trump’s actions that ignore both the law and the public’s paramount need for clean water.”

The coalition includes the attorneys general the District of Columbia. Hawaii, Massachusetts, Oregon and Vermont.

The rule is currently on hold after a stay by the 6th U.S. Circuit Court of Appeals.

Residents in the Great Lakes region will get a chance to voice their concerns about the waters' health in a series of March meetings. The International Joint Commission, which helps regulate use of the Great Lakes, has announced dates and other details of meetings scheduled in Buffalo and five other cities.

The United States and Canada are moving to ban microbeads -- the tiny plastic bits in toothpaste and facewash that are big water polluters. Now scientists are focusing on a similar problem -- and it’s lurking in your laundry pile.

Listen
Listening...
/
The problem with synthetics