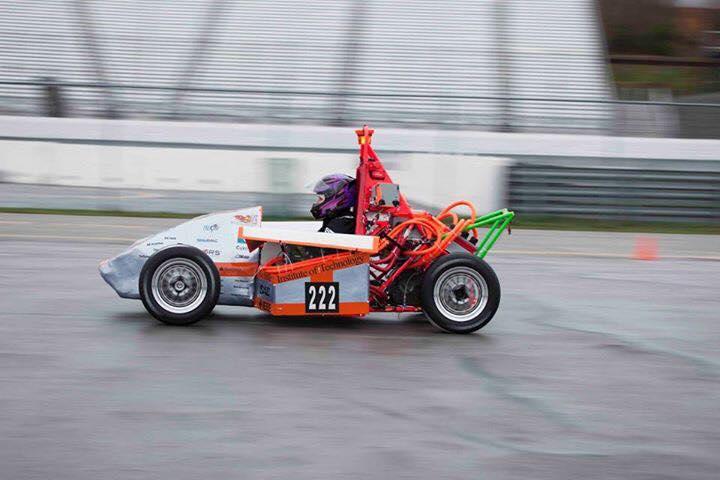 An all-female car race team from Rochester Institute of Technology finished third place in the electric category in its first global event. In early May, Hot Wheelz took part in the Formula Hybrid at the New Hampshire Motor Speedway.

A total of 30 racecars built by university students in the U.S., Canada, Turkey and India faced off at the annual event. Teams were given a set of mechanical and structural guidelines to follow when constructing their vehicle. Hot Wheelz' 82 horsepower, 700-pound electric hybrid car took about a year to plan and five months to build.

“It has four open wheels, not like a passenger car that’s all enclosed. It has two roll bars to keep the driver safe in a rollover impact and it has to be powered by an electric motor with high power lithium ion batteries,” says Maura Chmielowiec, chief engineer of Hot Wheelz.

Hot Wheelz, comprised of 40 engineering students, 20 of whom traveled to the competition, passed a technical inspection on the first day. But after making the recommended minor tweaks and undergoing a final brake test, a suspension problem occurred.

“I slammed on the brakes and it was just way too much force in the front - and the bottom and the front suspension twisted over each other. So it completely just ripped apart one of our wheel assemblies,” says Chmielowiec.

The setback was temporary. The women put up a tent and made a makeshift welding booth, began disassembling the broken wheel, and replaced it with a new one.

“We came together as a team the rest of that day to really pull together and show that we might have had a failure but we’re a team to be reckoned with and we’re going to get back out there,” says Jennifer Smith, Hot Wheelz project manager.

With a top speed of 50 miles per hour, the Hot Wheelz car was able to reach – and exceed – the team’s goal of completing at least one lap around the Endurance Event track. The electric car remained powered up for nearly 12 miles, and its endurance run totaled close to 20 laps.

The team’s on and off track performance was recognized with two additional trophies; prizes Chmielowiec says the women were most proud of.

“We actually walked away with two professionalism and management awards, one from Fiat Chrysler Automobiles and one from General Motors. That was really exciting for us.”