What will Trump mean for the Great Lakes?

But in the aftermath of the election, environmental advocates were trying to determine how his presidency will affect the region, especially in light of his pledge to defund the Environmental Protection Agency.

Aryeh Alex, director of the Ohio Environmental Council Action Fund, was disappointed by the election results.

"When we're talking to Ohioans who say that they want to turn on their faucet and have clean water to drink for the kids ... the EPA is at the forefront of protecting that water. [The agency is] not only ensuring that water is clean, but if there is a problem, they're the first ones to clean it up."

Tim Eder, Executive Director of the Great Lakes Commission, doesn't think a Trump presidency will be as devastating to the lakes as some are speculating.

"The Great Lakes enjoy bipartisan support that runs very deep from governors to our elected officials in Congress," he said. "I also think that when it comes to the Great Lakes specifically, problems like aging infrastructure may get some increased support." 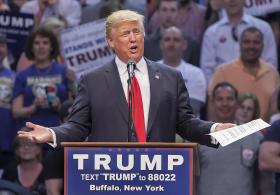 Trump's campaign position on energy states: "Make America energy independent, create millions of new jobs, and protect clean air and clean water. We will conserve our natural habitats, reserves and resources. We will unleash an energy revolution that will bring vast new wealth to our country."

Here are a few questions: Will he be able to reconcile his support of the coal industry with efforts to keep the air clean? Will he pull back on sustainable energy projects such as the proposed wind farm on Lake Erie? And will regulators aggressively pursue polluters?

Joel Brammeier, CEO of the Alliance for the Great Lakes, says Trump has been short on specifics, and there are "a lot of open questions and some concern because of the posture that was taken against the EPA." Still, he notes Trump made infrastructure spending a priority for his campaign, and that may benefit the region.

Alex noted that Trump also has questioned the validity of climate change. Alex added, "From toxic algae in Lake Erie and the Ohio River, to smog and dirty air from the coal-fired power plants throughout the state, there are environmental impacts that are impacting our community and hurting our citizens now."

Eder says he is aware that Trump has talked about de-funding the EPA, and that would be concerning if it came to pass. But, he adds, "it's a little early to tell that the changes on any level are going to have a terrible impact."

Jill Jedlicka, executive director of the Buffalo Niagara Riverkeeper, said, "Regardless of who's in power -- who's in the executive office or who's controlling Congress -- it's always been a fight. It's always been a challenge to prioritize scarce resources ... . We have to fight and we have to make arguments that a restored and healthy environment is good for the economy."

During the bruising campaign, some advocates worried about Trump's commitment to the environment.

They also sought his support for the Great Lakes Restoration Initiative, whose funding is interwoven with the EPA. It was put in place in 2010 and provides $300 million annually for research and other projects in the watershed. ​

In the Buffalo area, for example, the GLRI has provided money for projects from habitat restoration or shoreline improvement programs to the large-scale Buffalo River restoration.

Jedlicka said before the election that continuity is important to the success of long-term projects. "If the GLRI funding went away or was tremendously scaled back that would definitely put at risk all of the gains that we've made in recent years," she said.

The GLRI is just one program run through the EPA that funds restoration projects in the Great Lakes region. As of June 2016, the agency had doled out more than $1.6 billion to universities, nonprofits, and other organizations.

Wednesday, the agency announced that up to $26 million is available in the next round of GLRI funding. Money is available for projects addressing issues such as invasive species and agricultural runoff. (Coincidentally, the applications are due to the EPA on Jan. 13, a week before Trump's inauguration.)

It's unclear what Trump's comments about the EPA really mean. An agency spokesperson said before the election that it's unclear whether the GLRI would end, or simply continue through another agency.

At a September environmental conference in Ohio, a Trump's representative laid out an outline of  collaboration.

Former Ohio Division of Wildlife Chief Mike Budzik stressed the need for state and local groups to help the federal government in cleaning up the Great Lakes.

“The problem wasn't created overnight, and it won't go away overnight,” said Budzik. “The folks that are affected by the lake need to be at the table.”

The Great Lakes are much warmer than usual, and that will be a factor in limiting ice formation this winter, the National Weather Service says in its "freeze-up outlook."

The head of the National Museum of the Great Lakes is on a quest. He’s trying to locate Navy pilots who trained on Lake Michigan during World War II. It’s a little known chapter of the lake’s history.

Can we sell cattails -- and save wetlands?

Standing in the middle of Michigan's Shiawassee National Wildlife Refuge, it’s hard to comprehend the size. It’s about two-thirds the size of Manhattan – some 10,000 acres of marshes and bogs, forest and farm land.

Everywhere you look; there’s a hawk or a heron. Bushes rustle with rodents; and the air is filled with mosquitos.

Here, researchers are tackling invasive cattails -- a common problem in wetlands across the Great Lakes.